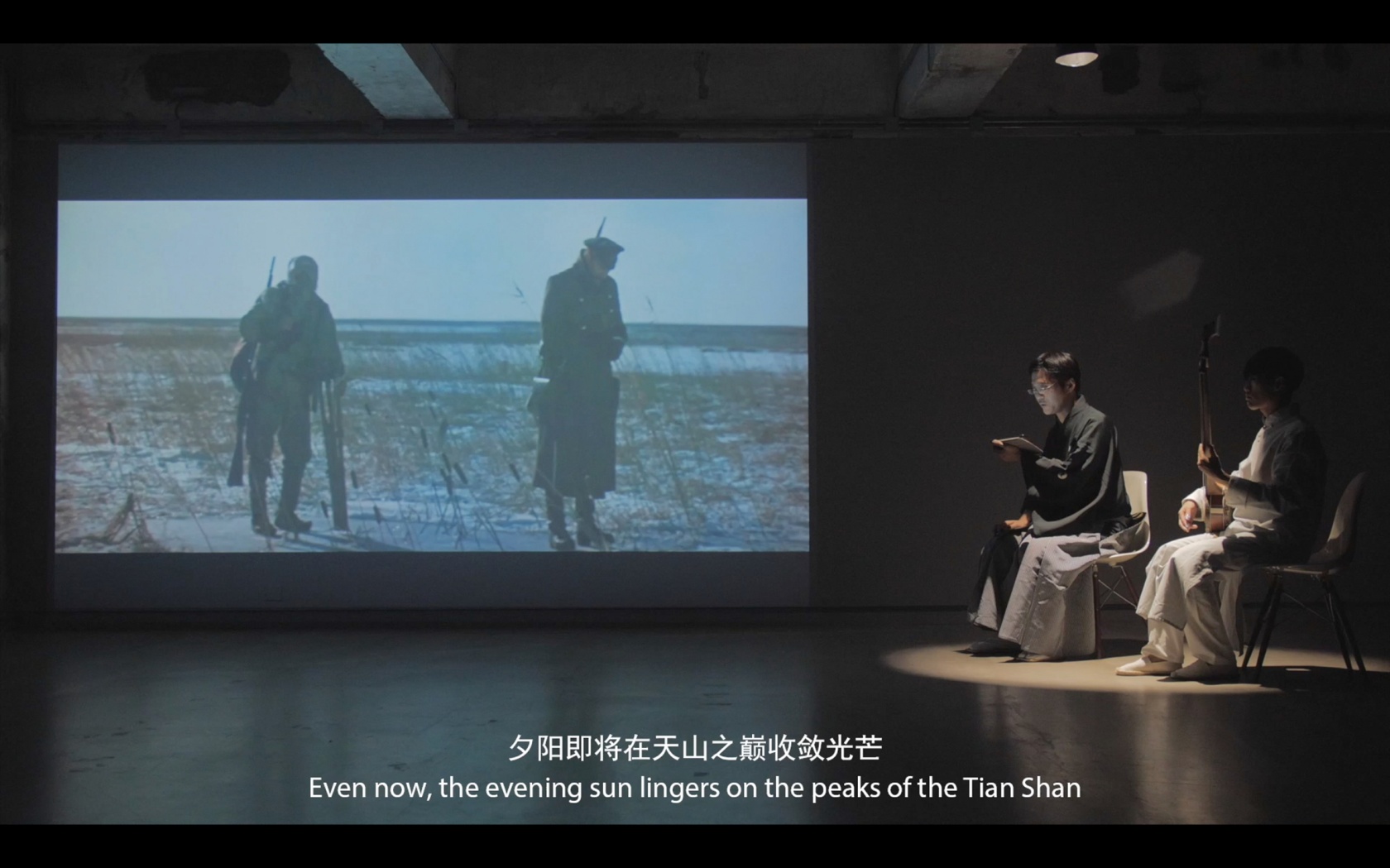 Forsaken Landscapes 2019 is set in a north-eastern hinterland, which becomes an unexpected backdrop for the history of film in China. The installation comprises a four-channel moving-image screens, which are dispersed at different angles across the exhibition space. The first encounter begins near the entrance, where the graphics of a film editing program is enlarged to depict the abstract shapes of a sound wave as it moves endlessly across the horizon of the screen. In the main room, the two largest screens feature a silent flow of archival cinematic footage in combination to a text, which together form a contextual background to a performance that takes place in the last screen. The artist creates an immersive montage using images taken of the same geographical terrain spanning the time from the 1930s up into the recent past, and focusing on contrasting interpretations and propaganda during moments of upheaval, cultural conflict, and reconstruction. Her intervention is to strip the images from their original storylines, allowing the audience to experience the shifts in vernacular as images of the land become appropriated for different purposes. With each scene, the landscape is evoked to speak euphorically of a fertile land, a certain utopia, or in other moments the territory appears barren or unrelenting when existential self-doubt begins to appear. The fourth screen features a benshi performer named Ichiro KATAOKA, who she collaborates with in order to extend her study into this ‘forsaken’ era. Practicing a tradition of theatrical live commentary and narration dating back to the silent era of film, he creates a bridge between the past and present, moving between the borders of these muted landscapes through his performance of translation. With this new work, the artist brings to the foreground the question of control and failure related to our ability to project and confer new meanings onto the surface of different images.

In this event, HAO Jingban will invite Japanese benshi performer, Mr. Kataoka, to “reinterpret” the meaning of these “unwelcome and abandoned” landscapes in live performances. After the performance, HAO Jingban will hold a conversation with Mr. Kataoka, share the thoughts behind the creation with the audience, and discuss history and landscape as well as film language and narrative.

Studying under the mentorship of Sawato Midori, Ichiro KATAOKA has performed in eighteen countries and regions, propagating the “benshi” culture on the international stages. As a professional film benshi so far, KATAOKA has participated nearly 350 silent films involving various forms such as animation and documentary in many countries including the West, Japan and China. Other than working in the field of films, KATAOKA has also been engaged in creating comic books, dubbing, calligraphy and writing articles. As a film benshi, KATAOKA took part in filmmaker Isao Yukisada’s Spring Snow, the Taiga drama Veda as well as Tami Okuda’s DVD “Panch Returns that seems to start moving”. He also took charge of the technical guidance, time textual research and the actor for the incoming movie Katsuben directed by Masayuki Suo in 2019. In addition, he works on the excavation of those lost negatives of silent films. KATAOKA has found the earliest version of film Chushingura as well as Watashi no papa-san mama ga suki Hideko Takamine starred in. Meanwhile, he actively engages in some cultural preservation tasks.