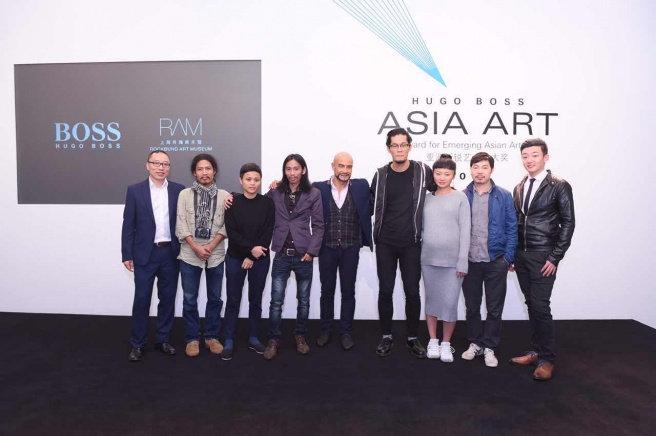 Shanghai/Metzingen, October 29, 2015 – HUGO BOSS ASIA ART: Award for Emerging Asian Artists opens tomorrow at Rockbund Art Museum (RAM) in Shanghai, presenting artworks by six nominated artists; Guan Xiao (China), Huang Po-Chih (Taiwan, China), Moe Satt (Myanmar), Maria Taniguchi (Philippines), Vandy Rattana (Cambodia), and Yang Xinguang (China). Building on the success of the first edition in 2013, the second edition of the award in 2015 continues to honour emerging contemporary artists who are in the early stages of their artistic creation and exhibition practices. The exhibition is open to the public from October 30, 2015 to January 3, 2016.

Curated by RAM and developed closely together with the participating artists, the exhibition demonstrates the rich diversity of practices these artists are developing in Asia. The selection of artworks ranges from painting to video art; from sculpture to installation and performance; from anthropological research to more conceptual and poetic representations; from observation of the localities to their formulation into a universal artistic statement.

Larys Frogier, RAM Director and Chair of the HUGO BOSS ASIA ART jury, elaborates on the concept of the exhibition, “HUGO BOSS ASIA ART supports each of the nominated artists in conceiving and achieving a powerful artistic statement related to their individual practice and research. The exhibition presents completely new productions and art projects of the utmost quality.”

“Following the success of its inaugural edition, the Award has become an important element in our arts program. We are also excited that it is returning with an extended focus, encompassing artists from Southeast Asia in addition to Greater China. As such, it highlights the rich possibilities for cultural exchange and dialogue across these regions,” says Dr. Hjördis Kettenbach, Head of Cultural Affairs, HUGO BOSS AG.

Home City Conversation was created as part of the research and education efforts of HUGO BOSS ASIA ART. Home City Conversation consist of public talks and studio visits organised by RAM, in collaboration with one renowned local art institution and one art professional in Beijing, Manila, Yangon and Taipei respectively. The series of events are taking place between September and December 2015.

Envisioned as an integral part of the Award, this edition will also present rich education programmes for the local and international publics. Consisting of two parts, IN-BETWEEN BORDERS and WHAT WE TALK ABOUT WHEN WE TALK ABOUT ASIA, these programmes continue to look into the region from diverse approaches, disciplines and subjects through leading thinkers and practitioners, with a special focus on the challenges in and between Greater China and Southeast Asia in contemporary art. The programme activities will take place at RAM, as well as in the home cities of the nominated artists in Southeast Asia, through to June 2016.