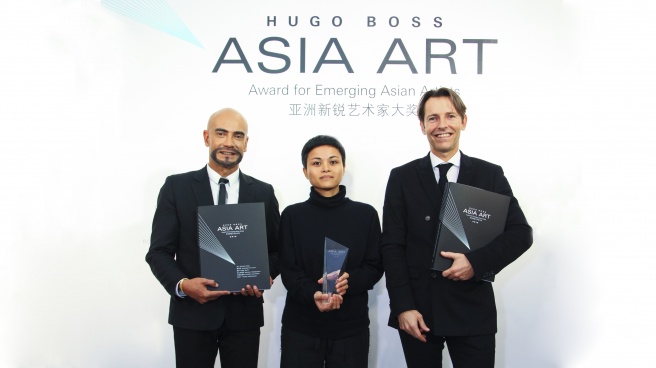 Larys Frogier, Chair of the HUGO BOSS ASIA ART jury, said: "With the precious contribution of the HUGO BOSS ASIA ART 2015 jury members, we are extremely proud to award the female artist Maria Taniguchi from Manila, Philippines. Her very singular, humble, but extremely focused practice of painting and video enriched the realm of media and raised a unique sensitivity of making the picture with infinite possibilities of meaning."

“We would like to extend our sincere congratulations to Maria Taniguchi, and express our gratitude to the jury as well as the Rockbund Art Museum for their dedication and cooperation in this project,” stated Dr. Hjördis Kettenbach, Head of Cultural Affairs at HUGO BOSS. “The award is an important part of our arts program and we are thankful to see how it is giving emerging artists a platform for their work.”

Maria Taniguchi was born in 1981 in Dumaguete, Philippines. She lives and works in Manila, Philippines. Throughout her paintings, sculptures, and videos, her work involves a determination for form. Maria Taniguchi’s voluminous brick paintings employ rigorous composition and monochromic techniques, with a dense investment of time and labour which is transformed into a visual spectacle. Her sculptures establish a tangible system in space, as well as an order and logic of viewing and participation. The manipulation of the camera and the status and movement of the objects in her video works also brings about consistent rhythms and patterns. With such logics and patterns, Maria Taniguchi unpacks knowledge and experience — connecting material culture, technology, and natural evolution — and investigates space and time, along with social and historical contexts. The artist finds herself in the exhausted socio-political situation and economic structure amid the reality of the Philippines, and projects this constant experience onto her works.

“Her never ending development of brick paintings engages subtle dialogues and blurs the frontiers with sculpture, architecture, installation, offering the spectators a powerful experience of the physical, the geo-political and the mental limitations/extensions of the inside-out space/time representations. Her detailed video compositions of objects, architectonic elements, and color spectrums turn out the repetition and the familiar into a full practice of difference and strangeness. Maria Taniguchi solidly positions her work, without any compromise, into the context of Asia and international contemporary art. ”commented Larys Frogier.

Whether with the brick paintings or with the moving images of plain and common objects, Maria Taniguchi enforces the action of viewing upon one’s senses. During this process, the objects are reassembled conceptually, following the logic that is either established visually by the artist, or spontaneously formulated in the mind of the spectators. The consequence is the reinterpretation of the objects, and the attainment of sensorial and cognitive experiences.​