Karen Smith is a British art critic, curator and art historian specializing in contemporary art in China since 1979. She has written widely on the subject for numerous journals and exhibition catalogues, and is the author of many artist's monographs, including Ma Ke, Shi Jinsong, Jia Aili and others. She has also authored several books on China’s contemporary art scene and its history including As Seen 2011: Notable Artworks by Chinese Artists (Beijing World Publishing Corp., 2012/Commercial Press 2012) and Nine Lives: The Birth of Avant-Garde Art in New China (Scalo, 2006, Timezone 8, 2008). She is currently working on a history of the 1990s titled Bang to Boom: Chinese Art in the 1990s.

Karen has lived in Beijing since 1992. Her curatorial work includes numerous group and solo exhibitions for China's contemporary artists in China as well as abroad, including (with Simon Groom) The Real Thing at Tate Liverpool (2007), The Chinese: Photography and Video Art from China at the Kunstmuseum Wolfsburg (2004), Music to My Eyes at Today Art Museum, Beijing (2009), and Subtlety at Platform China (2008), as well as solo exhibitions for Liu Xiaodong, Ai Weiwei and Xu Bing in the US and the UK. In August 2012, she was appointed Executive Director of OCAT Xi'an. 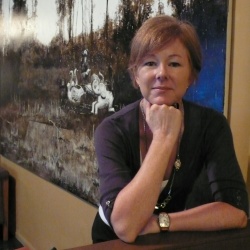