Hou Hanru is a curator and critic. Born in 1963 in Guangzhou, China, he received both his undergraduate and graduate degrees from the Central Academy of Fine Arts in Beijing and moved to Paris in 1990. He lived 16 years in France before moving to America in 2006. Based in Paris, San Francisco and Rome, he currently works as Artistic Director of MAXXI, National Museum of 21st Century Arts, Rome, Italy. He has been consultant to many international institutions. Among about twenty independent curators in the world, Hou is one of the top curators and thinkers.

For the Venice Biennale, the largest art platform in the world, Hou Hanru curated the French Pavilion in 1999, the “Zone Of Urgency” in 2003 and the Chinese Pavilion in 2007. These exhibitions brought him international recognition in the art world. He also worked as a curator at the Shanghai Biennale in 2000.

Hou Hanru co-curated "Cities on the Move" from 1997 to 2000, which involved more than 140 artists, architects and other creators, and toured seven cities around the world, receiving great global attention in the fields of art and architecture. 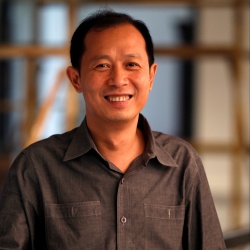